You are here: Home / STORIES / Our Wedding Recap: the setup, the celebration, and the sandwich

It’s hard to know where to even begin with all the details that go into a wedding. From bringing families together, to the detailed decor plans, to the dress, the group and surprise dance numbers, it’s all one of the biggest productions of your life. This is a very long story that details how George and I met and our wedding planning journey. I hope you enjoy reading it! 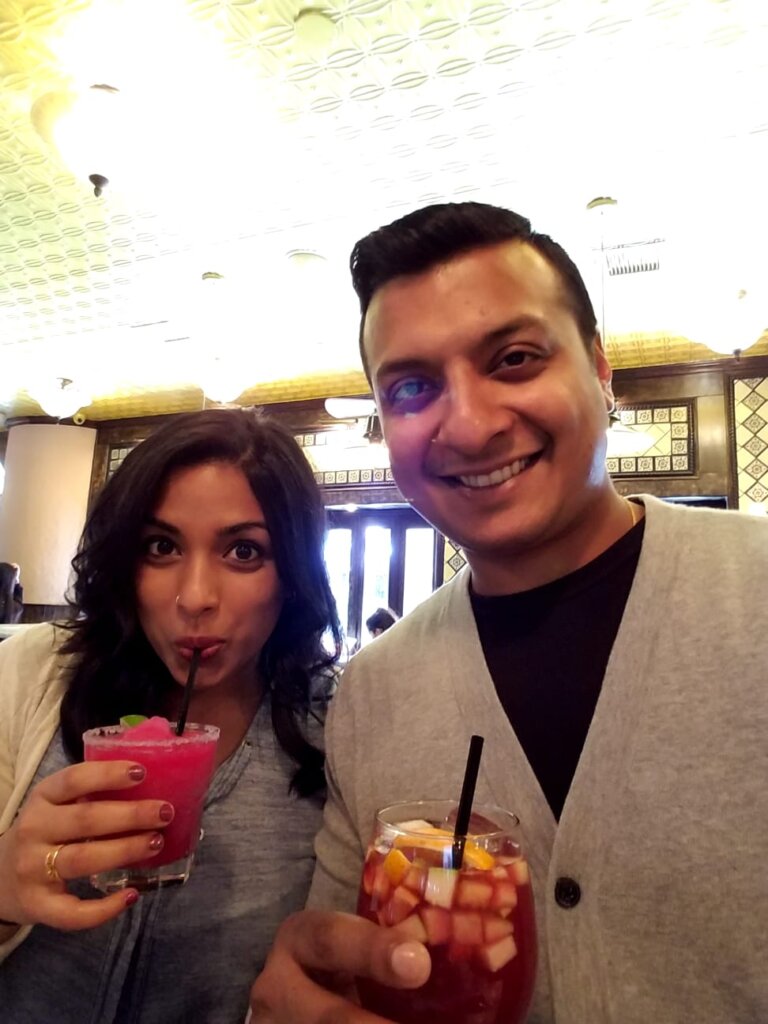 The first question asked with any couple is usually, “how did you two meet?” George and I met at a mutual family friend’s wedding in New Jersey. We happened to be sitting at the same reception table and, George knowing EVERYONE, was surprised to see three faces he didn’t recognize: my brother, sister-in-law, and me. He looked at us and said, “I don’t know how you guys do it in North Carolina, but we about to get TURNT tonight!” and proceeded to fill our cups up with red wine. Well, a few people got TURNT that night. Turns out, my brother and sister and George’s brother and sister were (turnt-ly?) plotting to get George and I to “talk” that night. Their plotting worked, although probably not exactly how it should have gone.

There we were, towards the end of the night, on the dance floor. The last few songs were playing and most people were getting ready to head out. He looked at me and asked what my name was. And I, thinking he’d never remember anyway, decided to have fun with it and give him a fake name: Francesca Viacelli. Not sure why I gave an Italian name that night, but it stuck. Later on he saw me again and said, “Hey, Francesca!” I laughed that he actually remember, albeit my fake name. We proceeded to talk, and talk, and talk. And the rest is history. Kind of.

I’d go back home to Charlotte and he’d go back to living life in Jersey. For some reason, I felt like I had to reach back out to George. So I decided to send him a friend request on Facebook. And I sent one to his brother, too, so it wouldn’t seem weird or too specific, ha! To break the ice, I sent the request along with a Louis C.K. meme about eating too much Thanksgiving food (since this was in November and it came up during our conversation). He took a few days to respond back to me, but when he did, we talked, and talked, and talked.

We would talk so much that, four weeks later, I’d fly up to New Jersey to meet him again. He says I invited myself up, but I like to think it was mutual! He showed up at EWR airport to pick me up with a welcome sign that read “Francesca Viacelli.” Dubbing himself the “Romance King,” he planned out the most epic first date ever. It was actually a four-day date weekend across three states! We started out in NYC for a paint and wine class, went to Atlantic City for the casinos followed by a shooting range (where apparently I have good aim!), and then Ledges Hotel in Hawley, PA (what I thought was the Poconos, but wasn’t) for a low-key end to a crazy weekend! 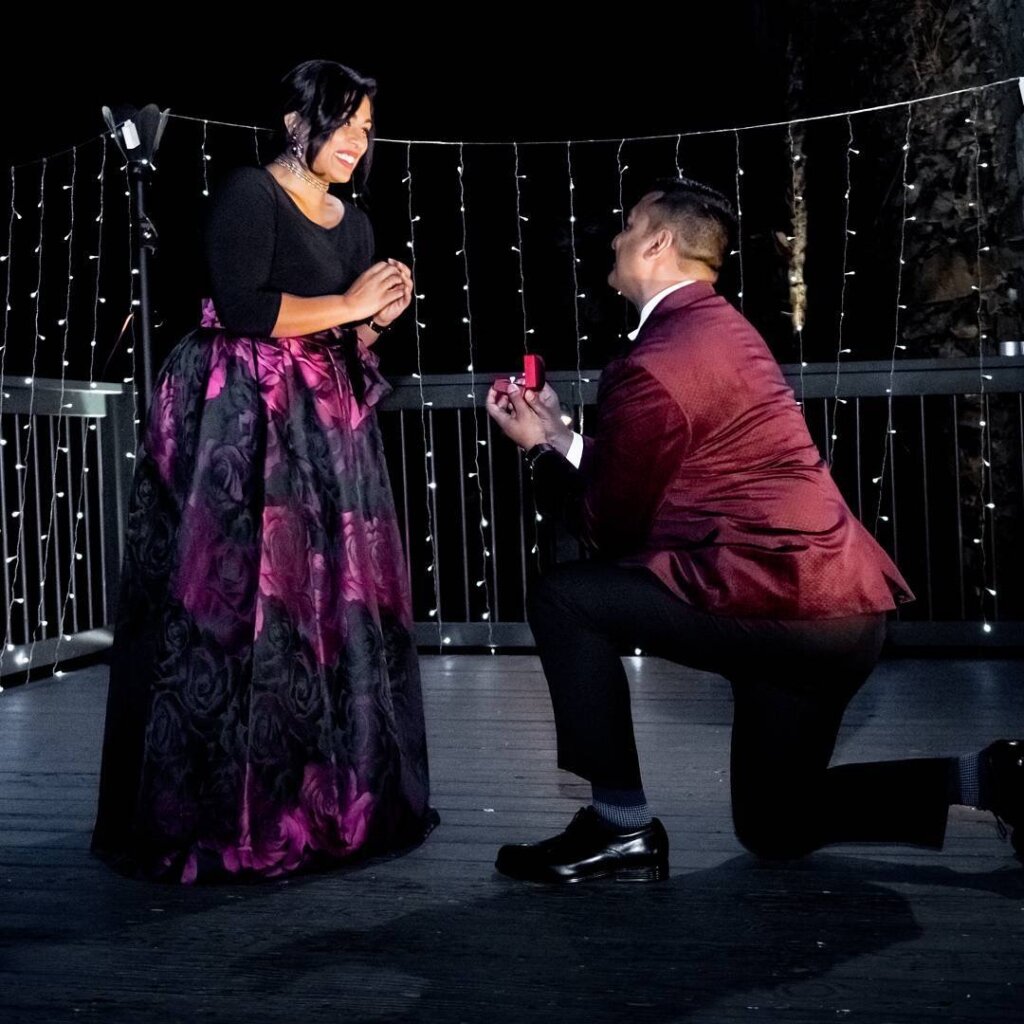 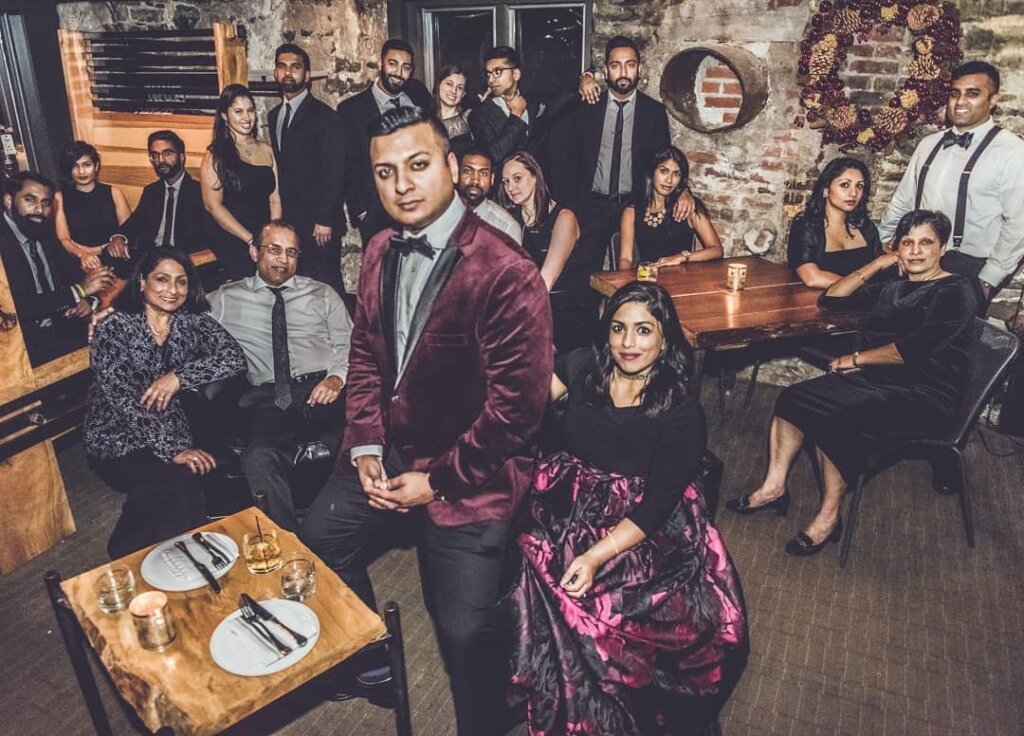 A year of trips back and forth between Charlotte and Jersey, lots of Facetime dates, and meetings of the friends and families, I decided I didn’t want to do long distance anymore. Around the time we met, I was on the heels of a homesick two years living in Frederick, MD and had just moved back home to Charlotte, NC. I was sad to leave home again, but ready to take a chance on George, and our relationship and made a move to Jersey.

I ended up getting a job in NYC and quickly tried to settle in. It all happened so fast. I was living in my own apartment and near NYC, a city I had always dreamed about living in. Unfortunately, a few months into my job, I got let go and was left with no income, an expensive apartment, and complete distress. Oh, and, to top it off, I got sciatica and could not move for about 4 weeks. This was one of the lowest points in my life, but it’s when I saw George’s love like nothing I’d ever experienced. He’d come to my apartment and help lift me up when I wasn’t able to stand without pain. He’d bring me food, try to make me laugh and forget about all the stress I was feeling. He loved me, and I knew it.

So, it didn’t surprise me at all that by the end of the year, he took us back to Ledges Hotel for a grand surprise proposal. And, I, of course, said yes. By the way, the proposal was in true “Romance King” fashion. He coordinated getting my family and friends back to the hotel where we had one of our first dates and positioned the proposal on the balcony where we had one of our deepest conversations. It all really came full circle.

Not to sugar-coat this part though. At 29-years-old, I was ready to get married, but terrified at the same time. It’s a strange feeling, but one I think that’s normal. I had been independent and doing my own thing for so long that a flash of fear did come over me from time to time. Was I ready? What would I have to give up? Would I lose my identity in marriage? These were all things I asked myself throughout the entire process. It’s a huge decision to make and one that no one can give you the right answer for because you uniquely experience it.

We jumped into the wedding planning process after a month of trying to enjoy just being engaged. Us being the crazy planners we are and ALL about the details, definitely caused us to bump heads throughout the planning process and it really opened our eyes to what it meant to bring our two families together, but, by the time we got to the altar, it was all so worth it.

George and I, with the help of our family and friends, planned our Charlotte wedding in just ten months. We originally wanted to get married in the Spring of 2019 because I loved the idea of being surrounded my blooming flowers in breezy weather, but our families REALLY wanted us to have the wedding in 2018 so we settled on November 17, 2018. 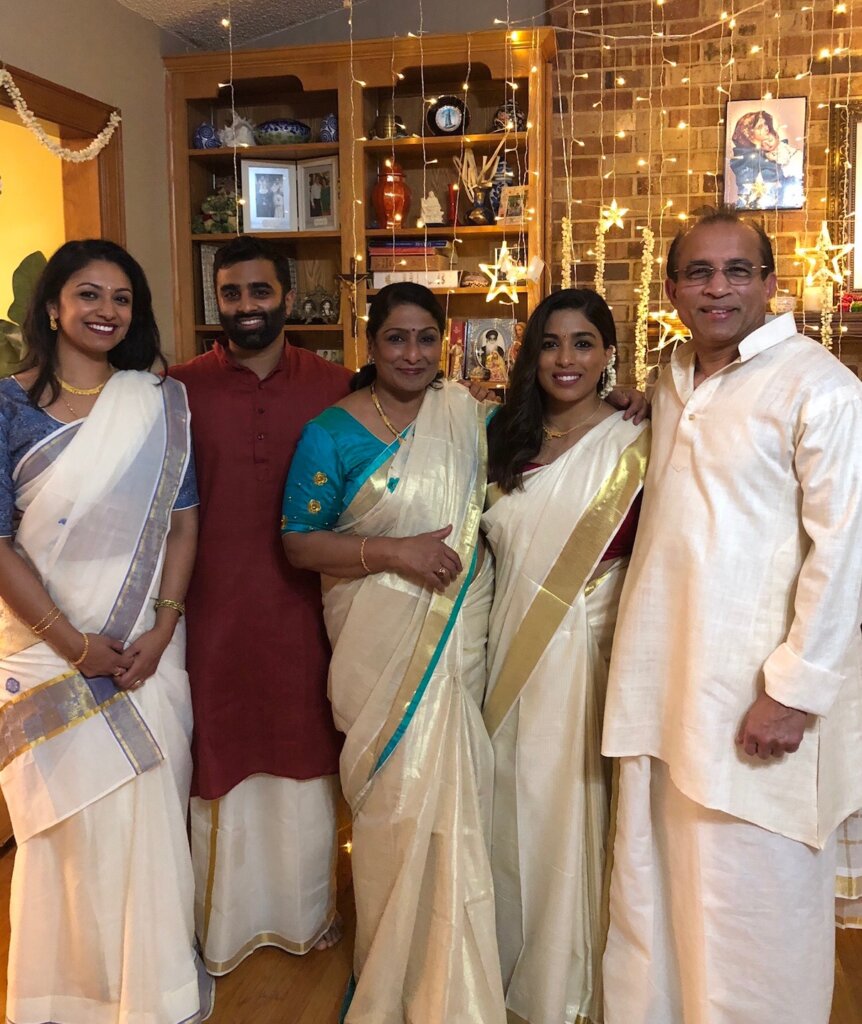 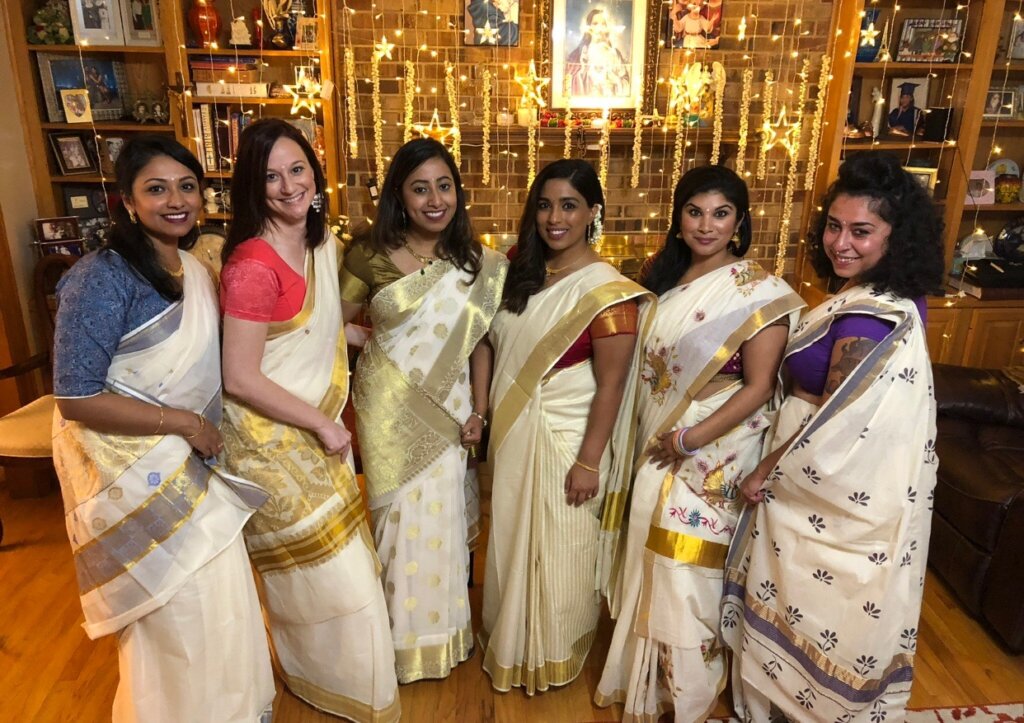 This was my favorite night. The Madhuram Veppu is a tradition in Kerala. It happens for both the groom and bride where their respective families gather to celebrate and kick-off the wedding festivities as a single family before two are joined to become one. The bride-to-be gets a special chair and her uncle (or relative) then asks the crowd if he should give her sweets. He asks the crowd three times, “Madhuram vekkate?” and the crowd responds three times, “Kettilla!” (I can’t hear you!) growing louder each time they’re asked.

Y’all, I wish I had all the pictures from that night, but my mom and dad went ALL OUT for the food menu. You want to know where I get my cooking skills (which, by the way, I have NOTHING on her) it’s my mom. She home-made all sorts of Kerala food like mango fish curry, shrimp fry, biryani, goat stew, beef fry, chicken curry, etc. She also made all the sweets including boondi laddus, rava laddus, murukku, achappam, avalose unda, jalebi, and more. They bought a freezer just to prep and store all the food for the entire wedding weekend. It was AMAZING.

Not too much to say here except every song we picked for entrances made me cry, including George’s pick to walk out to the Indian carnatic version of the the Game of Thrones theme song. Here are all the songs we picked:

I think the video and photos below explain just about everything about the wedding day, but, I will say, the best advice I got was to really allow ourselves to step back from planning, step back from the details, and forget what anyone else things – this is the day. It goes by SO fast so enjoy every last second of it as much as you can.

George and I were on a mission to finish all of our major planning details upfront so that by the time we got to the wedding month, we could breathe a little. But, as the saying goes, you can never plan for everything. The week of our wedding, a major snow storm hit the northeast causing flight delays and cancellations for a lot of our friends and family coming to Charlotte from Jersey and beyond. Let’s just say at that point I was freaking out a little that everyone (including George) wouldn’t make it. Gratefully, the majority of our friends and family made it because either they quickly hopped in a car and drove or took really terrible flights to get there – can’t thank them all enough for making it the best day ever.

A couple of notes on the reception.

Ya best believe all my attention was on the FOOD! We LOVED working with our venue’s chef team to create a custom menu that included our favorite flavors/recipes from my blog. Also handmade a couple hundred jars of cardamom-coconut-fennel spiced sprinkles (that apparently is good on ice cream and in chaya lol). But, the best foodie thing that came out of the wedding? The SHENISHA SANDWICH! What’s a Shenisha Sandwich you ask? Click here to find out.

P.S. Can you tell I stuck with the Spring theme? 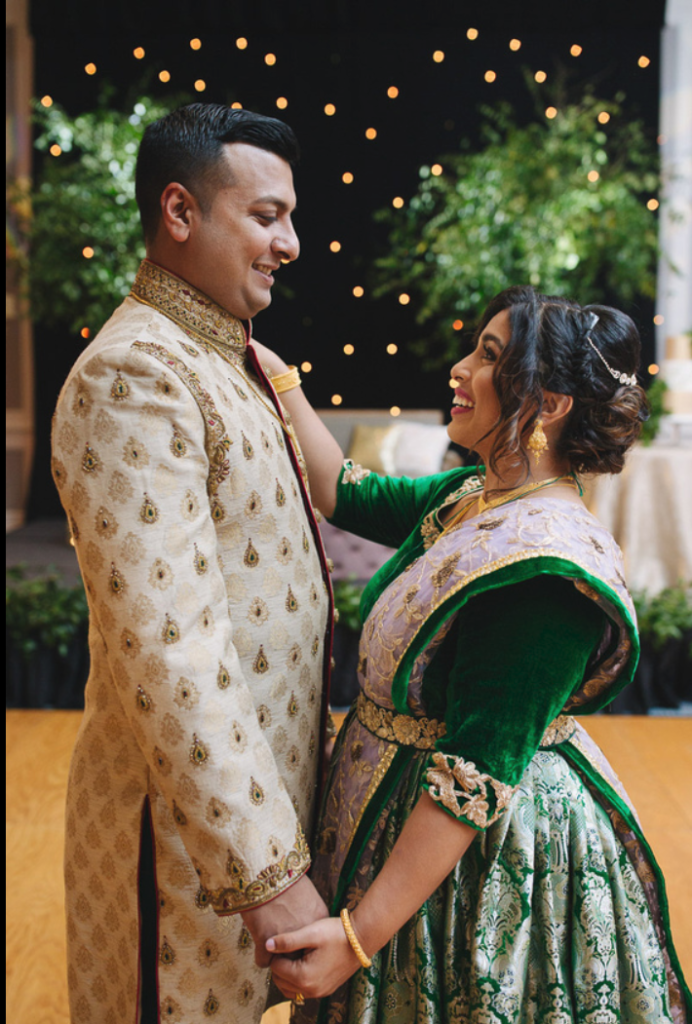 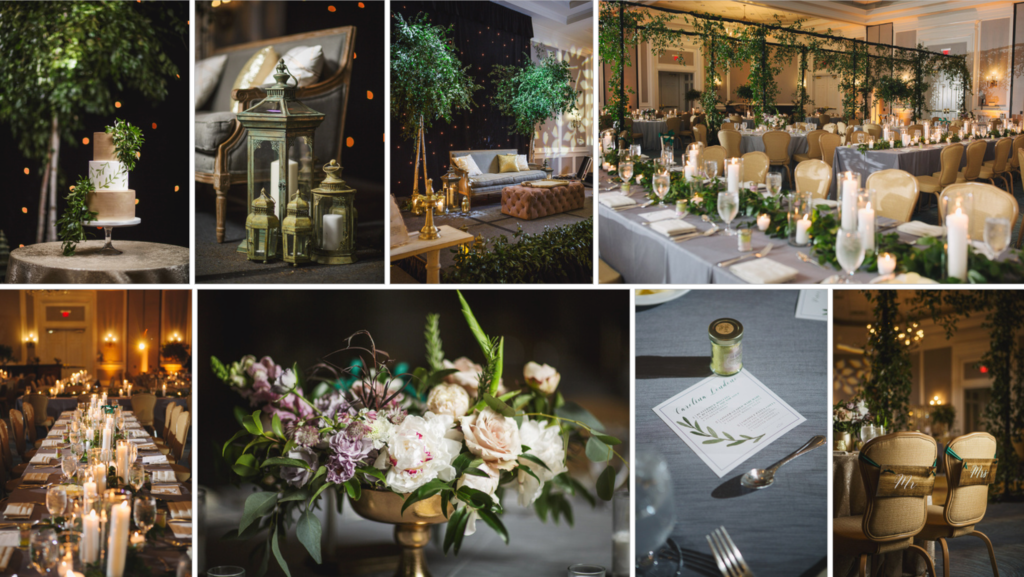 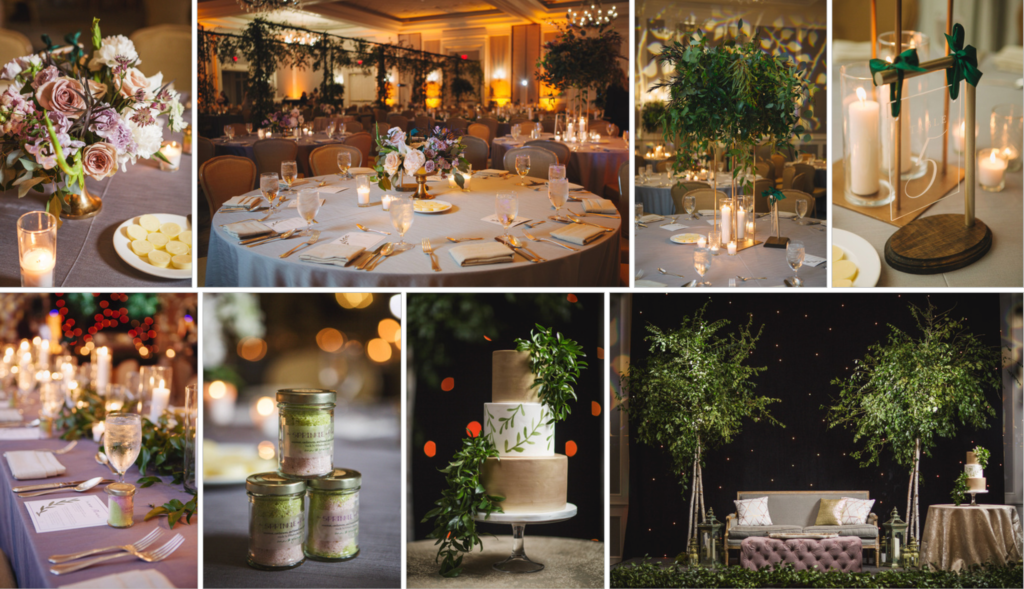 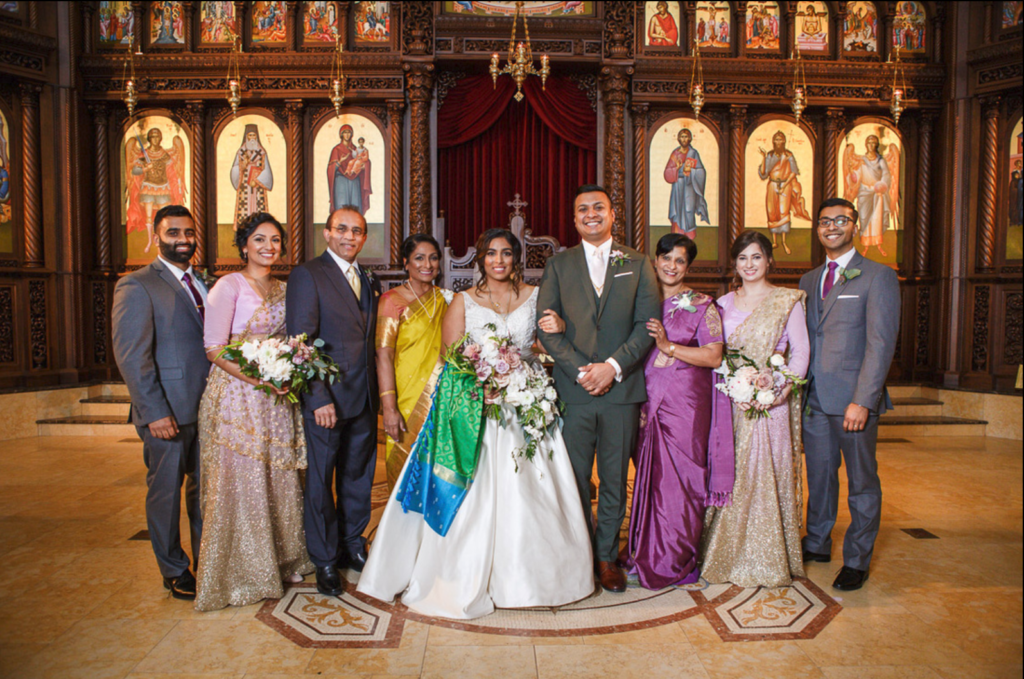 And they lived happily ever after.

JK! There’s more work after a wedding. Marriage, so far, is a fairy tale still in writing. Some days are as happy as this wedding day. Other days, we need to remember this wedding day to understand why it’s worth the frustrations and challenges we’re bound to face. We made a commitment to each other and our families and, while there will be many days ahead where we won’t want to do something, we will choose to do it because that’s our promise and gift to each other. And I hope we always remember that 🙂 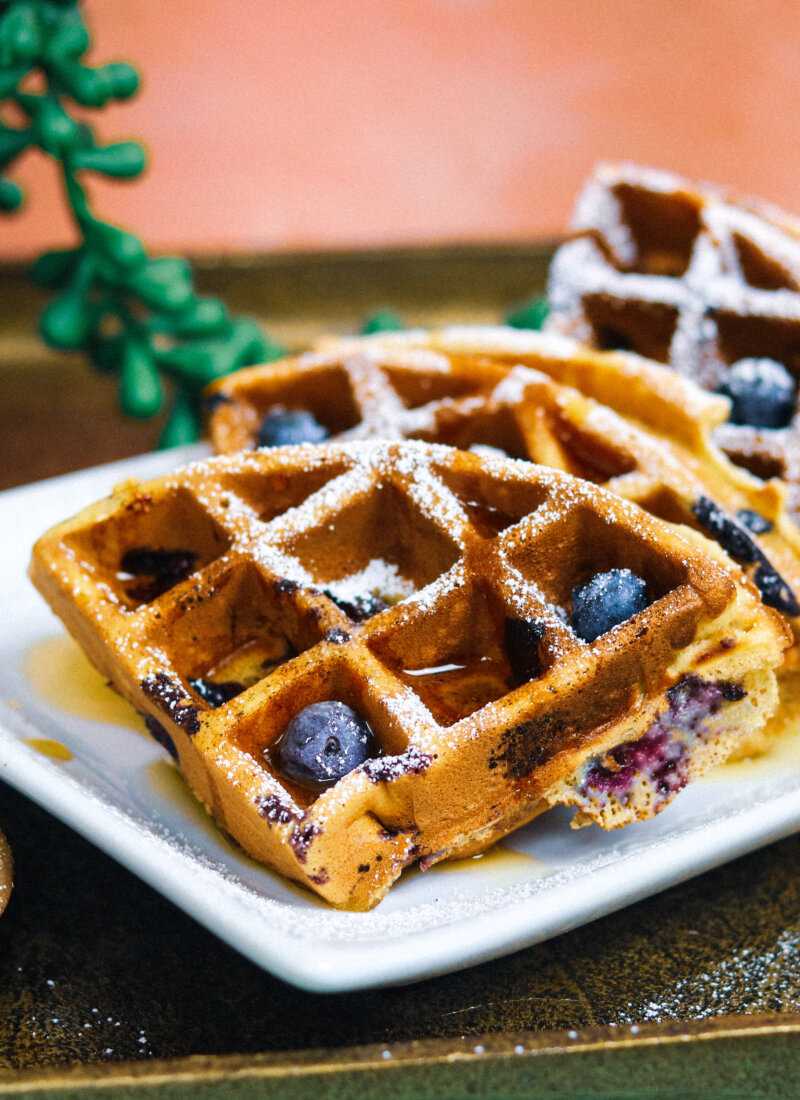 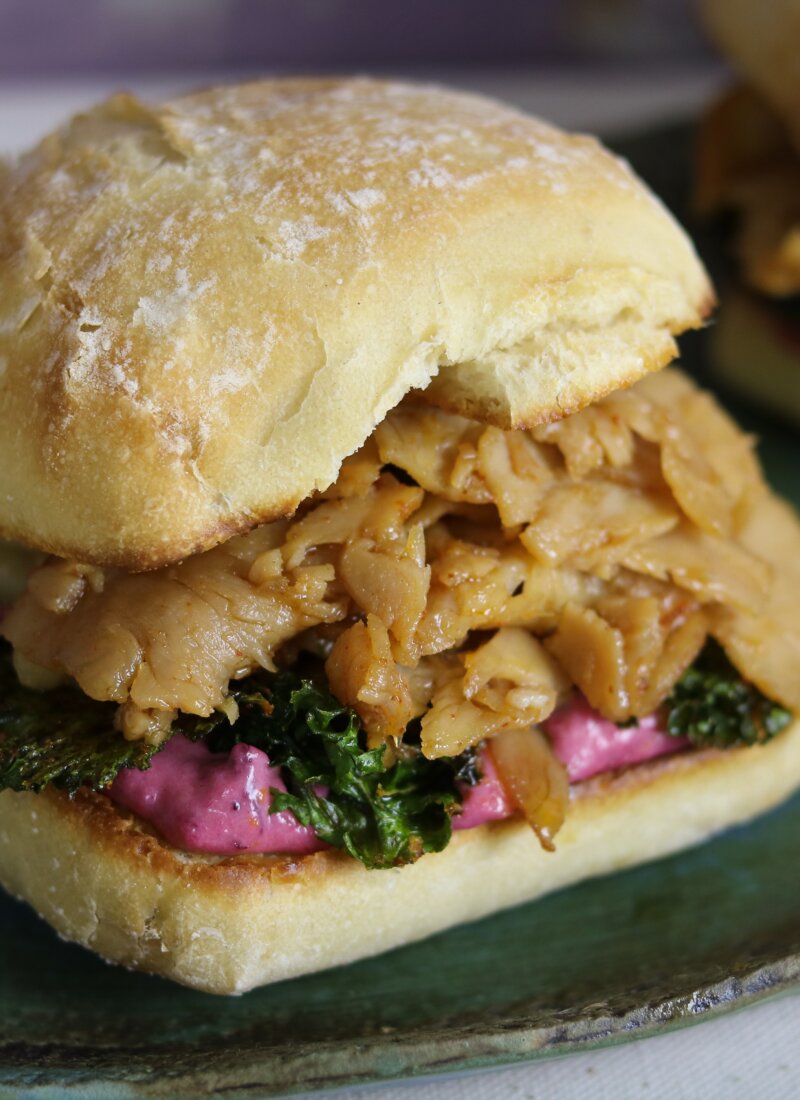 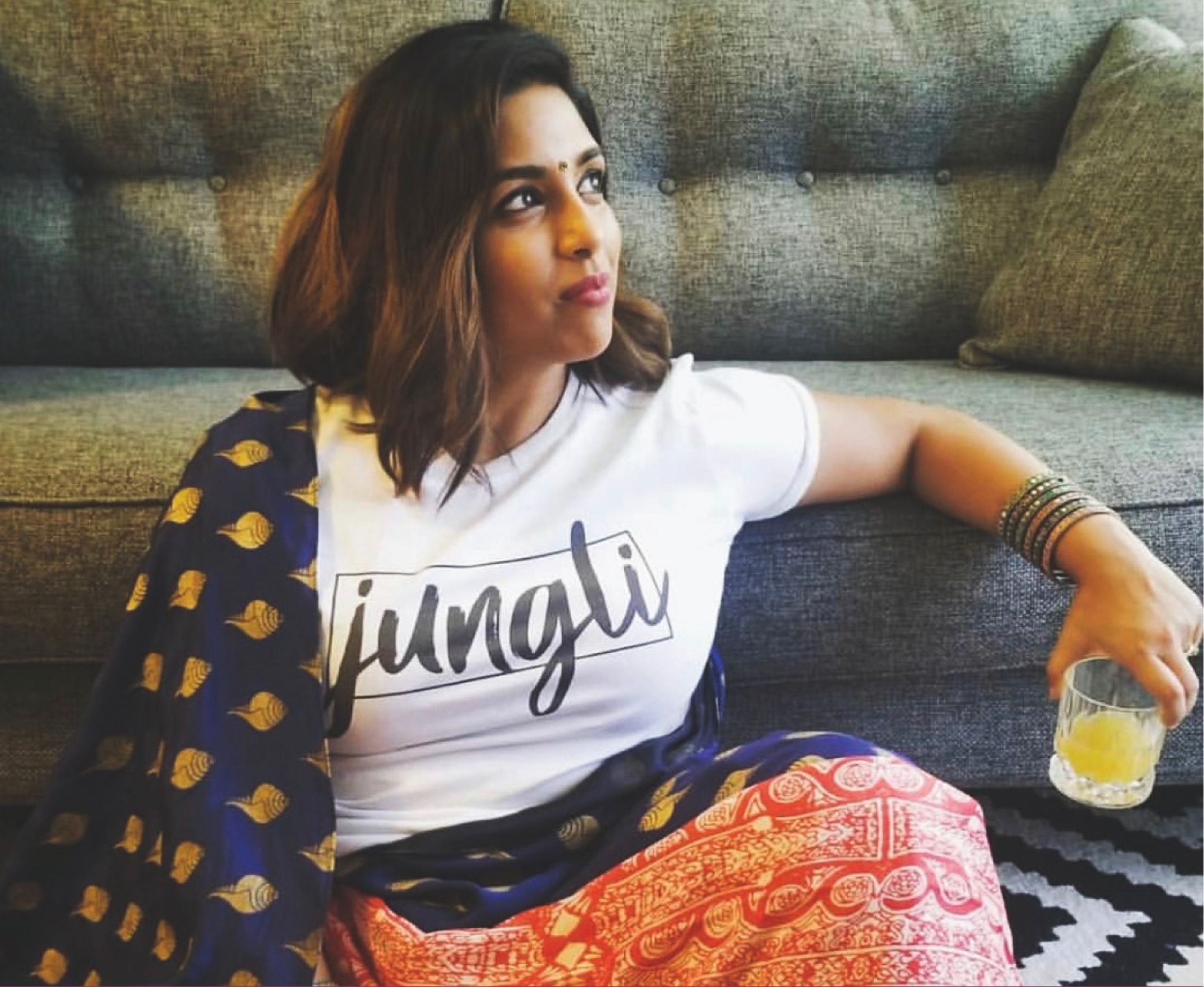 #SoundsFamiliar: Never in my wildest dreams 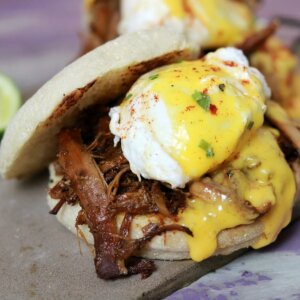 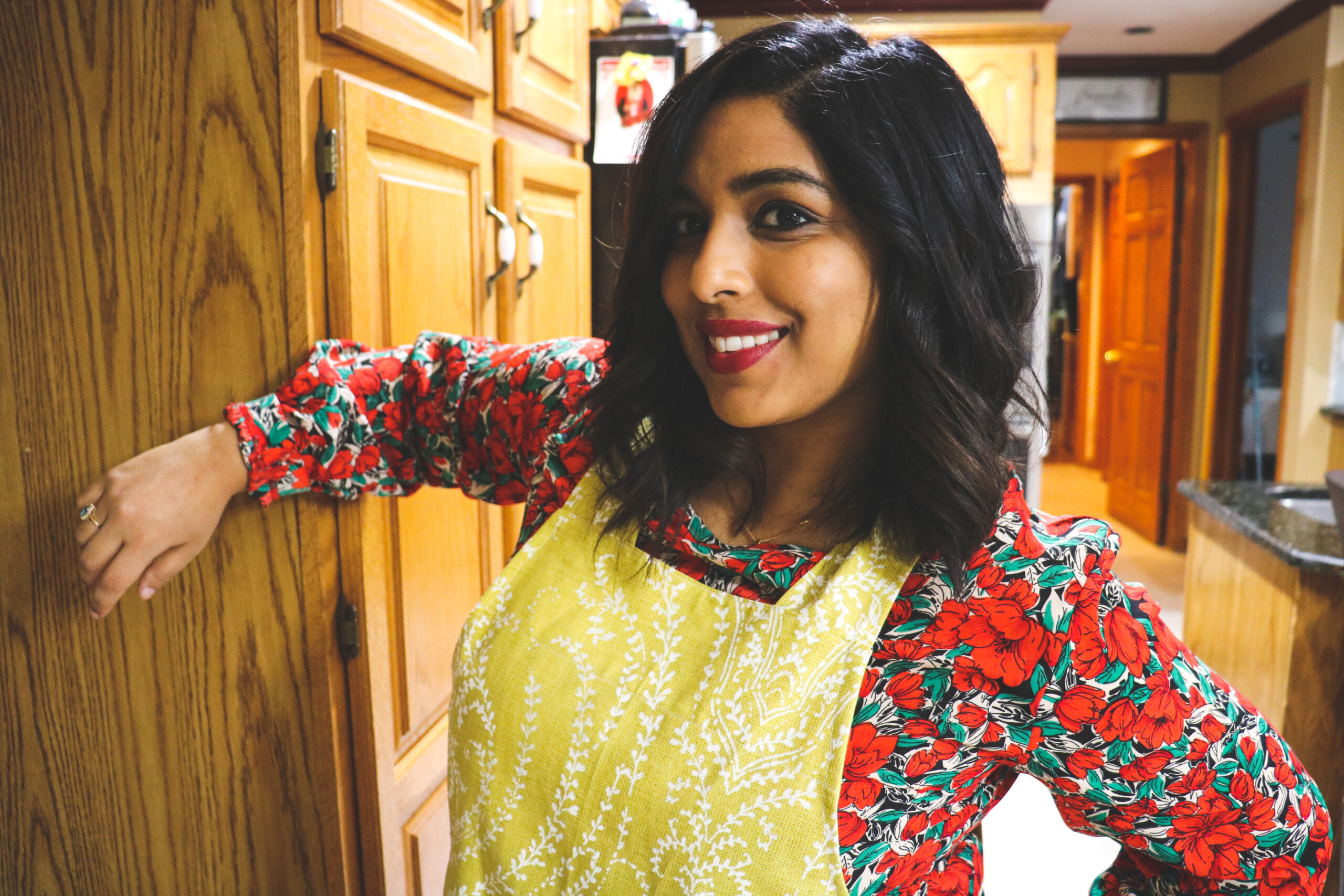